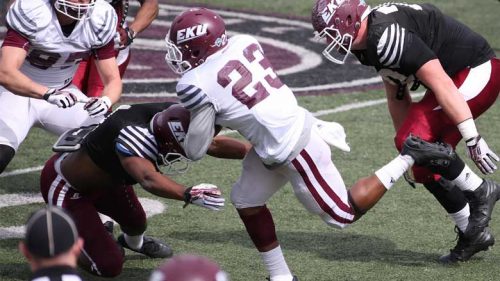 School has started! So has athletics. Most athletes are already practicing. The safety of our athletes is first priority. Approximately 400,000 concussions occurred in the 2008 to 2009 school year (SWATA, 2015). But far more than that are likely occurring. Only 42 % of schools have access to athletic trainers and most concussions are occurring during practice (SWATA, 2015). Awareness of concussion management should be on everyone’s mind. Understanding what a concussion is, what to do if you suspect an athlete has suffered a concussion, and how to return an athlete to participation is foundational for athlete safety. This article highlights what parents should know.

A concussion is a type of mild traumatic brain injury (Mayo Clinic, 2015). The brain is surrounded in the skull by cerebrospinal fluid. When the brain tissue is moved against the skull a concussion can result. Any sudden blow to the head or body with enough force can result in the internal movement of the brain. A fall to the ground, a direct hit to the head, or the whiplash force from an auto crash can result in a concussion. Knowing the signs of a concussion after such an incident is a big part of the battle.

The onset of concussion symptoms can be immediate or delayed and last days, weeks, or longer (Mayo Clinic, 2015). The Mayo Clinic lists the possible immediate symptoms as:

These symptoms are direct indications that a concussion has resulted from concussion causing event. Symptoms from concussions are temporary. But watching for certain symptoms indicate that the injury is more than minor and needs immediate medical attention. Critical symptoms are:

After a potential concussion causing event, athletes, or anyone suffering from such an event, need to be assessed for the presence of concussion related symptoms. Athletes displaying critical symptoms require emergency medical treatment. Those with any symptom of concussion should be removed from play and observed for the progression of symptoms. Concussions require managed return to play.

Any athlete exhibiting signs of a concussion should be seen by a physician. The physician is instrumental in returning the player to full competition safely. If an athlete returns too soon, or anytime symptoms are present, the player has an increased probability of suffering another concussion and also is more susceptible to exertional heat illness ( Alosco, Knecht, Glickman, & Bergeron, 2012; e-medicinehealth.com, 2015). Schools should partner with medical providers to develop a return to play program. Hopefully the school also has access to an athletic trainer to serve as the competent person overseeing the return to play program and serving as a liaison with the medical provider. Athletes should never be released to full physical exertion right away. Almost 16% of athletes that suffer concussions are returned too early. Astoundingly 50% of those who return too early and suffer “second impact syndrome” die as a result (SWATA, 2015). It is important to structure physical exertion from light to full duty progressively. This prevents symptom progression and also restores athletic performance, while preventing second impact syndrome or an exertional heat illness.

Athletes, coaches, parents, and medical professionals must partner to manage concussions when they happen and also to prevent concussions. Early recognition and awareness are the keys to concussion management.  Athletic technique and general safety are two areas of concern in prevention. Proper tacking and hitting techniques for football can limit concussion events for example. Football is a sport of primary concern for males. Female athletes suffer more concussions in soccer, basketball, and bicycling (SWATA, 2015).  General safety can prevent injury events that result in a concussion. A good example is proper clear distance from activity and properly padded objects that an athlete could come into contact with.

Athlete safety involves concussion management. It is a partnership between the athlete, school, coaches, parents, and medical professionals. The goal is athlete safety by preventing concussions and then properly managing them if they do occur. Team success and individual athlete success depends on it. Be aware that a concussion is a traumatic brain injury with potentially serious consequences if not recognized and managed. Recognize the symptoms. Return your athletes that have suffered a concussion back to full competition through a medically partner return to play program.