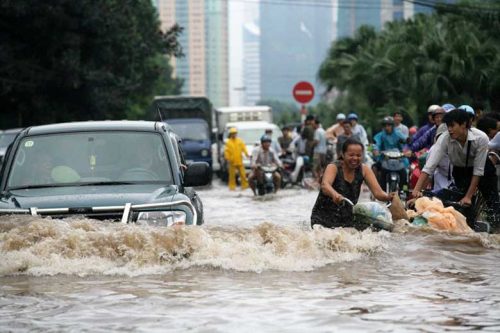 While some disasters are more regional and occur rarely, floods can happen anywhere and stem from various causes. Flooding is one of the most frequent and disruptive hazards throughout the world, causing widespread damage, contamination and even death. While floods occur more frequently in certain areas, it’s important for people to stay educated and prepared to avoid the worst a flood may bring.

A flood is defined as a situation in which water overwhelms its usual boundaries and engulfs normally dry land. It is difficult to define a flood by its root cause as there are often more than one, and there are multiple flood types. Floodwaters don’t have to originate from a particular location but simply need to overwhelm the surrounding dry land.

Rainfall is a primary cause of flooding, which is why they can occur anywhere. Bangladesh is the flood capital of the world, however there are certain geographical locations that have a higher, more frequent rate of flooding. People who are in near proximity to rivers, lakes, the coast, high rainfall areas and are at or below sea level will experience a higher chance of flooding than those inland or above sea level. Furthermore, people living in areas with poor irrigation and sewage systems are more flood prone than usual.

Floods are dangerous and can happen suddenly, making safety procedures and action plans important to know.

These occur when heavy rains quickly travel down steep slopes and either overwhelm rivers, which pour into surrounding land, or surge into areas unprepared for the large quantity of water. The danger behind flash floods is seen in their speed and unpredictability.

Floodwaters have the ability to move heavy objects with ease, but they usually affect only concentrated areas. A flash flood is one of the most dangerous floods because it can happen quickly and usually takes people by surprise.
One of the largest flash floods occurred in Boscastle, UK in 2004. The city sat in a low area at the convergence of three rivers. The flood happened during high tide. Over 60 millimeters, an average month of rainfall, fell within two hours, demolishing homes and the property of over 1000 people. Fortunately, the emergency response was successful and no lives were lost.

Simply put, it happens when the sea submerges the coast. These surges are caused by severe storms which bring strong winds. Strong winds push the sea further into the coast and eventually it overwhelms usually dry land.
When it comes to floods, these are relatively safe and they normally don’t last long. Depending on the tide, they may come in strong but will slow and dissipate quickly over the surrounding land.

The main cause of flooding in urban areas is poor or lack of drainage. High intensity rainfall overwhelms sewage and drainage within cities and neighborhoods, filling the streets in a dangerous mix of sewage and floodwater. Urban flooding is a slower process that hinders transportation and may damage daily activities but rarely results in deaths.

Ponding is a similar occurrence without the sewage and drainage system components. It occurs when water collects in flat areas with nowhere for natural dispersal, resulting in low-level standing water. The danger associated with these types of ‘flooding’ is water contamination. Standing water and water that has mixed with sewage is unusable and spreads disease.

These occur when heavy long-term rainfall raises a river much higher than usual. The excess water then spreads over large amounts of land. River floods can be slow moving, but their large volume of water can swallow entire road systems within multiple towns. River floods not only damage infrastructure and cripple economies, they can also cause loss of life and property.

If the flood is developing:

If the flood is in progress:

No matter what type of flood occurs, it should be treated with respect. Staying informed, especially today, does not have to be difficult. Being prepared can mean the difference between safety, danger and possible loss of life. Not only should residential homes have evacuations plans and take the necessary steps, but companies and businesses should be prepared as well. People cannot predict the future, but they can manage their safety.