Protecting Your Skull with the Next Generation of Hard Hats 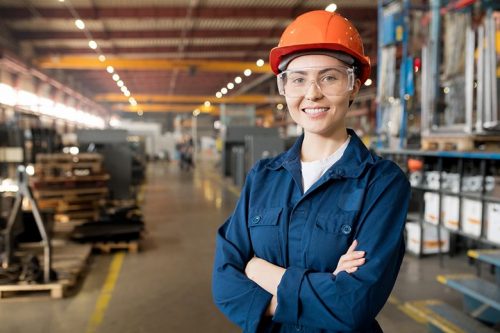 Hard hats have protected the heads of construction and industrial workers for 100 years, according to Bullard, the company that pioneered the “skull bucket” and now manufactures a range of personal protective equipment (PPE).

However, the Laborers’ Health and Safety Fund of North America reports that a new trend is coming to PPE for the heads of workers: safety helmets.

“The next generation, the ones that are just starting to be seen on construction sites, are a lot more like a helmet a mountain climber might wear, or a hockey player, or a kid on a bicycle,” G. Scott Earnest of the National Institute for Occupational Safety and Health told The New York Times in a 2019 article, “The Evolution of the Hard Hat.”

Companies are required to provide protective headgear for employees working in conditions where head injuries can occur from slips, falling or flying objects, or from electrical shock and burns, according to Occupational Safety and Health Administration (OSHA).

Much like other PPE such as safety glasses, safety boots, and face masks, safety helmets give industrial workers, contractors, and visitors “protection from hidden and obvious hazards present at the workplace,” Bahaa Alsayed, an OSHA/NASP authorized trainer, wrote in a 2018 LinkedIn post.

The Differences Between Hard Hats and Safety Helmets

Hard hats and safety helmets are similar products that help protect the heads of construction workers and workers in allied trades. However, due to the advancements of new hard hat technology, protective headgear options boast some major differences, including:

“Climbing-style helmets are also designed to have a chin strap to help hold them on the wearer’s head. Some safety managers are encouraging the use of chin straps, and some workers are finding that these helmets are more comfortable as a system with a chin strap,” he said.

The History of Hard Hats

During World War 1, U.S. Army Lieutenant Edward Bullard, founder of Bullard, witnessed the benefits that helmets offered soldiers at war. After his return to San Francisco, he patented a version of a hard hat made from canvas and glue, according to the company website.

Bullard’s hard hats, known as the “Hard Boiled brand miner’s helmet” back in the day, were the “first commercially available head protection device” for industrial workers, according to Smithsonian Magazine.

Miners and U.S. Navy shipyard workers were among some of the first to wear the protective helmet. Bullard acquired additional patents to develop new versions of the safety helmet for different industries.

The demand for safety helmets is on the rise and is projected to increase through 2023, according to a 2018 report from the Global Safety Helmets Industry published on MarketWatch.

Staying up to date on hard hats and other protective technology is essential for professionals responsible for the safety of workers on construction sites and in similar fields. An online master’s degree in safety, security and emergency management can provide the educational foundation necessary for leadership in occupational safety and related careers.

Production Vs. Safety in the Workplace

Preparing for and Responding to Energy Emergencies

Are Safety Helmets Coming for Your Hard Hat?: Laborers’ Health and Safety Fund of North America

The Evolution of the Hard Hat: The New York Times

The Rise of Safety Helmets in Construction: HD Supply

The History of the Hard Hat: Smithsonian Magazine