Robotics Safety in the Workplace 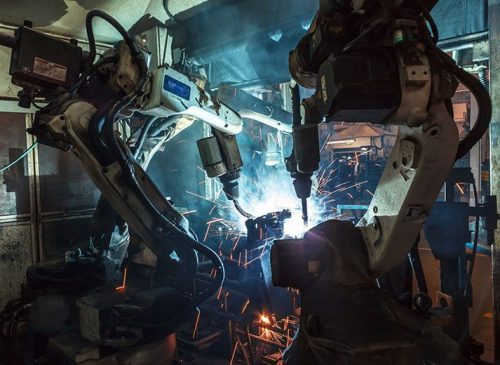 The use of robotics is becoming increasingly common in the workplace. Long a staple in the automotive industry, robots have moved into sectors such as food and consumer goods, plastics and rubber, life sciences and electronics, according to the Robotics Industries Association (RIA), a trade association that promotes robotics and automation.

For example, the International Federation of Robotics’ (IFR) latest “World Robotics Industrial Robots” report found there were approximately 293,000 industrial robots operating in factories throughout the U.S. in 2020. New robotics sales, the report found, were also strong, and remained on par with the 33,300 units shipped in 2019.

What Are Robots in the Workplace?

Examples of robots in the workplace include automotive industry robots, welding robots, aircraft inspection robots, industrial floor scrubbers and order assembly robots (such as those used by retailers like Amazon). Workplace robots allow for a more productive — and more efficient — way to control costs and increase overall production.

According to Safety+Health magazine, certain robots are more likely to be found in professional settings, including:

Mishaps with robots are most likely to occur when workers aren’t where they normally are, usually conducting necessary maintenance, testing or programming. Robots are rarely sophisticated enough to know whether a person is nearby.

The best safety tactic is staying away from any robot that is in motion or carrying out a scheduled task, according to Carole Franklin, the RIA’s director of standards development. “What we’ve been dealing with so far is a robot that is fixed in place, so a person has to approach the robot in order to be exposed to its hazards,” Franklin said.

Companies using robotic automation must make safety their utmost concern, and workers must be taught they cannot be complacent about the hazards of automation. For example, managers must ensure that workspaces are clearly marked, and educate employees about which floor spaces they need to stay away from when a robot is operating.

Additionally, robot operators must be trained on how and when to safely intervene if a robot stops or malfunctions during operation. If a company is using multiple robots, separate training should be conducted for each one.

In the upcoming years, it’s projected that industrial robots will be less expensive and have greater technical capabilities. This, combined with advances in technology that allow robot manufacturers to assemble, install and maintain robots faster and at a lower cost than could be achieved in the past, are expected to have a positive impact on the industrial robotics sector.

As industrial robots become increasingly prevalent, occupational safety professionals need to understand both current and upcoming safety initiatives. OSHA’s existing technical manual outlines the hazards, investigation guidelines and controls necessary for safeguarding personnel. To get a better idea of the risks workers are facing, OSHA is also considering an update to its rules governing the use of machines in the workplace. The agency has requested information from those most likely to be affected, including those working side-by-side with collaborative robotics.

In addition, RIA has worked with both the American National Standards Institute and the International Organization for Standardization to examine and update guidelines for humans working with machines. Current safety standards account for collaborative robots, and recent specifications address safety considerations in establishing a collaborative robot system.

Learn About Robotics Safety with an Occupational Safety Degree

Eastern Kentucky University’s online bachelor’s degree in occupational safety is designed to prepare graduates to protect the health and safety of workers in a variety of environments, including those where workers interact with robots.

Students can also fulfill the requirements for a minor in Fire and Safety Engineering Technology and may also qualify for the Institute of Safety and Health Management’s Associate Safety Health Manager designation.

Discover how earning a Bachelor of Science in Occupational Safety degree from EKU can give you the skills to ensure the safety of others.

Futurism, “Amazon Now Has Machines to Automatically Box Up Orders”

Safety+Health, “Robots in the Workplace”

Statista, “The Countries with the Highest Density of Robot Workers”