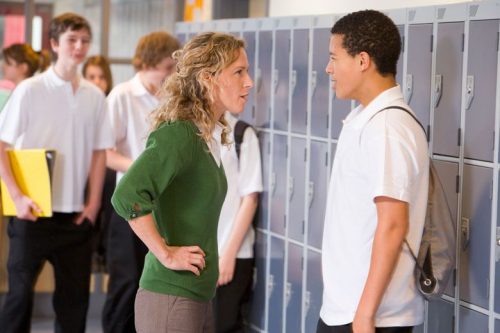 There have been at least eight school shootings in 2019 resulting in injuries or deaths, according to Education Week’s 2019 School Shooting Tracker. In 2018, there were 24 school shootings in the United States that resulted in the loss of 35 lives and injury to 79 people.

Students, teachers and parents are concerned about shootings and school safety threats, but many different theories exist on how to address this growing problem. In the 2018 PDK poll, where over 1,000 people in the U.S. answered questions about education topics, parents said they were not supportive of arming teachers. While most parents supported the idea of mental health screenings, “there is no screening that will identify students who are likely to become school shooters,” Kathleen Minke writes for PDK International. Beyond school shootings, there are other school safety threats facing students. According to the American Society for the Positive Care of Children, an estimated 160,000 kids skip school each day for fear of being bullied Across the world, around one-third of students aged 13-15 are involved in physical altercations, UNICEF reports.

The threats facing school safety are real and complex. But teachers and administrative officials are developing new methods to combat these problems.

The devastating effects of school shootings and violence have been covered extensively, but teachers and administrators need to be aware of their real severity. Below are statistics on school shootings from the U.S. Center for Homeland Defense and Security (CHDS), as well as facts and figures about school violence.

There were 702 incidents since 1970 where the shooter was a student at the school.

According to the data, perpetrators behind most school shooting incidents targeted individuals they knew.

According to an article in Psychiatry Research, “being rejected by peers amplifies the probability, for both victims and bullies, of using NSSI at least once.”

Students with disabilities were reported to be more prone to bullying and being victimized by bullying acts. Bullied LGBTQ students suffered a lack of intervention by administrators or teachers on their behalves.

The CDC reported that across the country, approximately 7 percent of students said they had missed school for at least one day due to concerns over their safety.

Nonviolent school crime and other disruption

In addition to school shootings and other violent threats, teachers and administrators must also grapple with nonviolent crimes and events that can disrupt educational activities.

In 2017, 10.5 percent of all hate crimes took place at schools and colleges, according to the Federal Bureau of Investigation (FBI). The Bureau’s professionals define a hate crime as “a traditional offense like murder, arson or vandalism with an added element of bias.” For schools, a hate crime could include painting a swastika onto a wall to make students of a Jewish background feel intimidated, threatened or uncomfortable, or posting notes on a bulletin board with messaging that attacks or makes fun of a peer’s cultural background.

Additionally, hateful behavior and attacks can happen to students off school grounds. Students can commit hate crimes through cyberbullying efforts such as sending an offensive message or image on social media that insults race or heritage. From the Teaching Tolerance report, Responding to Hate and Bias at School:

Everyday acts of intolerance manifest themselves in many ways: name calling; slurs; sexual harassment; casual putdowns regarding race, ethnicity, gender, size, abilities, perceived sexual orientation or gender identification. The bias might come in the form of clothing — certain colors or styles — or music or symbols associated with hate groups. Growing intolerance can also be found online, posted on Tumblr or tweeted on Twitter. It might be blatant, such as a noose left hanging from an African-American student’s locker. Or it might be subtle, a hushed rumor texted like a whisper, phone to phone, person to person.

Teachers and administrators face significant challenges when addressing the multiple threats to school safety. However, there are actions they can take to help in their efforts to prevent school violence.

Be observant of potential threats

The report titled Responding to Hate and Bias at School stresses the importance of observing students’ behavior in-and-out of the classroom to mitigate potential threats. Teachers and administrators are tasked to pay close attention to the tone and phrasing of student messaging and communications about school safety. For example, education officials should make note of students using certain words in a derogatory manner, chanting phrases that are hurtful and degrading at games, or whether the school’s methods of rewarding achievement leave others feeling left out.

Teachers and administrators can also monitor their own behavior so they do not set a bad example or perpetuate existing threats. This includes not joking about students when they aren’t present, not making bigoted statements about certain students or groups, and making sure that behavior extends to the school community. The report suggests that educators and administrators communicate with bus drivers as they observe students whose behavior may be dangerous or pose threats.

“Speak regularly with bus drivers about what they are seeing and hearing on the buses. Occasionally assign staff to ride buses (or ride the bus yourself ) to monitor behavior and to reinforce to students that the climate of tolerance includes not just to the school grounds, but to the bus as well,” says the report.

Understand the different types of threats

The National Association of School Psychologists also notes different levels of school safety threats that a teacher or administrator may encounter:

Every threat is different, and teachers and administrators should respond appropriately. Solutions that work for addressing one threat — such as having the potentially dangerous student attend mental health counseling for a low-level threat — may not be the best method for addressing medium- or high-level threats. A key strategy is to have a strong threat assessment team in place, where a group of trusted educators and administrators from diverse backgrounds provides different perspectives and opinions on threats and helps schools prevent instances of violence.

Centers for Disease Control and Prevention, “About School Violence”

Education Week, “School Shootings in 2018: How Many and Where”

Education Week, “School Shootings This Year: How Many and Where”

Teaching Tolerance, “Responding to Hate and Bias at School”