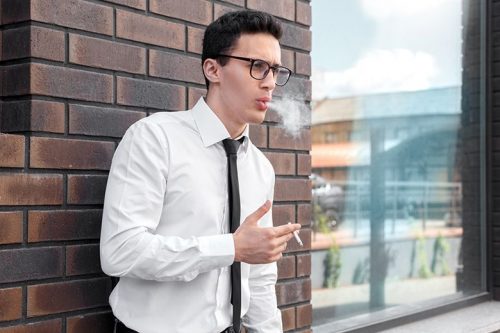 Although tobacco use is on the decline among Americans, preventing second-hand smoke exposure at the workplace remains one of the top employee safety and health issues, according to the Centers for Disease Control and Prevention (CDC).

“Secondhand smoke exposure is an important public health issue … and has been recognized as one of the top occupational hazards that contributes substantially to the prevalence of occupational cancer among nonsmokers,” Dr. Sara Luckhaupt, a study author, medical officer for the CDC, and preventive medicine physician in Cincinnati, told CNN.

Enrolling in an online emergency management degree program such as Eastern Kentucky University’s Master of Safety, Security, and Emergency Management teaches safety workers and students who are pursuing occupational health and safety careers different methods that can keep employees safe in the workplace.

Secondhand Smoke Exposure in The Workplace

Secondhand smoke is “is smoke from burning tobacco products” including cigarettes, cigars, pipes, or tobacco smoke that has been exhaled, according to the CDC. Workers in certain jobs and industries may be more vulnerable to secondhand smoke than others, including:

The construction industry reported the highest number of employees exposed to secondhand smoke at work, according to the CDC’s 2019 study. Non-smoking workers in the commercial and industrial machinery and equipment repair and maintenance industry were also affected.

“The industries with the highest prevalence of secondhand smoke exposure and the highest number of exposed workers include outdoor workplaces and other settings that are unlikely to be protected by smoke-free laws,” Luckhaupt said.

Because the CDC’s findings also show that workers in the construction, mining and transportation industries are shown to have the highest rates of tobacco use, colleagues in those fields are also thought to be at elevated risk for secondhand smoke exposure.

“Secondhand smoke exposure is responsible for over 40,000 deaths per year in this country,” Brian King, a deputy director for the CDC’s Office on Smoking and Health, told CNN. “Even brief levels of exposure can be harmful.”

More than 7,000 chemicals exist in tobacco smoke, per the CDC. While hundreds of those chemicals are considered toxic, around 70 have been directly linked to cancer. Heart disease, strokes, and more specifically, lung cancer, are some of the harmful health effects that can occur in non-smoking workers who are exposed to secondhand smoke, the CDC reported.

How to Avoid Secondhand Smoke at Work

As of March 2020, the District of Columbia and 28 states have comprehensive smoke-free laws in place, according to the American Lung Association. However, the CDC’s National Institute for Occupational Safety and Health (NIOSH) suggests safety managers take additional precautions to protect employees from secondhand smoke at work:

Creating a smoke-free environment for employees can also offer cost-saving benefits to businesses and municipalities.

Dayton, OH, stopped hiring workers who smoke in July 2019 and had plans to screen applicants if the city received what it called “reliable” information that the person used tobacco products.

Phoenix, AZ-based U-Haul also announced in February 2020 that it would no longer hire smokers, a move that affects 4,000 workers in Arizona and applicants in 20 other states that allow companies to decline nicotine users, according to USA Today.

The policy is part of the company’s “Healthier You” wellness program that includes reimbursements for gym memberships and personal trainers, healthy meals and vending machines in company facilities, and an online health portal.

Students enrolled in Eastern Kentucky University’s online emergency management degree program can learn the essential components of safety, security, and emergency management. The program allows students to customize their experience through a Multidisciplinary Track or with concentrations in Corporate Security Operations, Occupational Safety, or Emergency Management and Disaster Resilience.

Production Vs. Safety in the Workplace

Preparing for and Responding to Energy Emergencies

Almost 20% of nonsmoking workers are exposed to secondhand smoke on the job, study finds: CNN

U-Haul will no longer hire smokers in 21 states: USA Today