The Use of Robotics in Firefighting 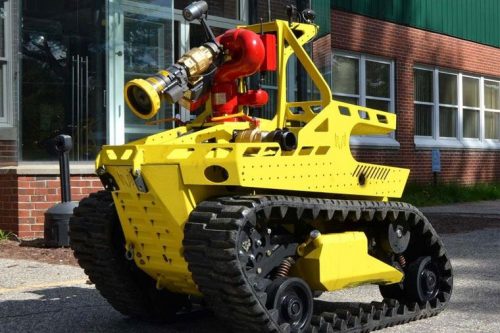 Fire is a classical element that has been an equalizer on Earth prior to the start of written history. It has many positive attributes (heat, energy, cleansing, etc.) but it can be extremely dangerous when outside of control. Structure, vehicle, aircraft ship fires and wildfires can wreak havoc and cause serious injury and/or death. Thankfully, brave men and women have dedicated their lives to protecting others from flames that can occur due to a myriad of reasons anywhere, at any time. Unfortunately, firefighters are only human and can succumb to injury or death as well.

According to the National Fire Protection Association, there were 29,130 injuries reported while fighting fire in 2015. These injuries are also coupled with 68 on-duty deaths. Injuries and casualties are the reason why safety professionals, the government and high-tech companies have come together in order to create firefighting robots that can perform tasks too risky for people.

Robotic firefighting systems are designed with certain tasks in mind. These include analyzing and locating fires, conducting search and rescue, monitoring hazardous variables and the primary task of fire control and suppression. Fixed firefighting robotic systems, like automatic fire sprinklers and alarms, are used in heavily populated and hazardous areas for rapidly extinguishing any threat. These are usually simpler systems relying mostly on UV or IR sensors and, as the name suggests, are fixed.

Mobile robotic firefighting systems are another type, mostly in the form of remote controlled vehicles affixed with fire suppression tools like water or foam hoses. These are capable of travelling into areas unsafe for people through an array of sensors, visual camera, IR and more technology that transmits information for navigation to a remote operator. Safety professionals and engineers are even experimenting with aerial robotics like drones for added situational awareness, and close-quarters indoor robots that can eliminate fires at close range.

The following are some real-life advancements in firefighting robots that can reduce the number of injuries and fatalities caused by fire.

The Tactical Hazardous Operations Robot (THOR) was developed for the U.S. Navy’s Shipboard Autonomous Firefighting Robot (SAFFiR) program. It’s a humanoid robot with the capability of traversing unstable floors on ships as well as utilizing hoses and opening doors. Navy ships have hazardous materials onboard with minimal room to move, so extinguishing fires is paramount.

It stands at 177 cm tall, uses stereoscopic thermal imaging and LIDAR (light detection and ranging) sensors for navigation and has successfully put out compartment fires along with the assistance of a person. The goal is for THOR to walk and work semi-autonomously with the help of a remote operator. Currently, however, there are still some setbacks. The machine is slow and susceptible to fire and water damage. These challenges are being resolved so that it may extinguish fires too dangerous for people to get near.

Originally a small tank created for the U.S. Army by Howe and Howe Technologies, this remote-control vehicle has been suited with a hose that is capable of pumping 500 gallons of water per minute. Using mounted cameras, it can travel into extremely hazardous situations, like wildfires, while being controlled from up to a quarter mile away.
Weighing in at 1,640 lbs, it was designed as an IED (Improvised Explosive Devices) neutralizer. With some firefighting modifications, it can also be used as a fire neutralizer. Onboard is an innovative cooling system that provides consistency by using some of the water pumped as a coolant throughout its body. Although it pumps a third less water than a fire engine (1,500 gallons per minute) it also costs considerably less. Coupled with its ability to enter hazardous areas without putting people in harm, it could be seen putting out wildfires in the future.

Created by Emicontrols, a subsidiary of the TechnoAlpin Group, it uses a turbine as an innovative method in firefighting. Meant for small spaces like tunnels, it has the ability to move obstacles with its bulldozer blade, clear smoke with its turbine and focus its water spray from mist to jet.

It’s a tracked vehicle that uses the turbine to atomize water into a large mist that covers more area while using less water. In certain cases, the water can be focused into a powerful jet capable of spraying 3,500 liters per minute. Operators can be up to 500 meters away, but it is restricted like other firefighting robots due to its connection with a water hose.

The Fire Ox is one of the few robotic firefighting vehicles that carries its own water tank. Designed as a first response unit, it suppresses fires, assists in search and rescue and can handle dangerous materials. Originally created by Lockheed Martin as a Squad Mission Support System (SMSS) for assisting soldiers with their gear in the field, it was retrofitted with a water tank and hose for distribution.

The Fire Ox is semi-autonomous and can be controlled from up to 200 miles away. Due to its mobility it has the ability to traverse situations unsafe for people, minimizing casualties and rescue time. It can also be used in a multitude of situations including wildfires and structure fires.

Continue Development of Robotics in Firefighting

Firefighting robots are still being developed and perfected for more common use in the field. Occupational safety professionals are working with other professionals and governmental agencies to make the futuristic technology a reality. Those who have a passion for defending first responders from overly dangerous situations can help shape the future of firefighting robotics.

The safety of firefighters and the victims caught in fires is paramount, urging the production of these robots forward. They have the ability to withstand environments too hazardous for people and can prevent further damage that may happen left to traditional methods of suppression.

A Basic Guide to Pre-Fire Management