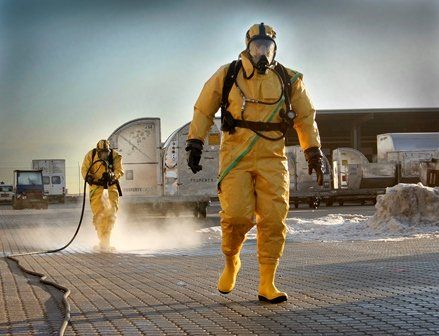 Hazardous materials and wastes are defined by the Environmental Protection Agency as those that are potentially harmful to human health and the environment.  In the United States, there are four industries responsible for approximately 90% of all industrial materials and wastes generated. Those four are:

These “large quantity generators,” particularly petroleum refineries and large chemical plants, produce over 1,000 kg (2,200 pounds) per month of hazardous wastes. As a result, these are the most heavily regulated and highly watched facilities in the United States.

Not every chemical is hazardous or toxic, but many are, so care must be taken in handling, using, combining and storing them.  Toxic chemicals pose a wide range of health and physical hazards to the industry’s employees.   Hazardous materials in chemical plants have caused sickness, injury and even death.  Risks include skin injuries and infections, skin cancers, allergies, asthma, chemical burns, reproductive problems, birth defects, asphyxiation, injuries to internal organs, various cancers and death.

Employees’ exposure to hazardous materials comes in four physical forms:  gases or vapors, liquids, dusts and solids. The form can affect how the material enters the body and, to a certain extent, how much damage it inflicts.  For this reason, the correct use and maintenance of the appropriate safety equipment is vital in the event of hazardous materials spillages, leaks and other accidental exposure in order to protect workers.

There is a wide array of chemicals an industrial company may use, but certain hazardous chemicals are commonly used in the chemical industry.  These materials are closely regulated by the Federal Environmental Protection Agency (EPA). The EPA sets the permissible exposure limits for dealing with hazardous materials in the workplace. They also set the standards, practices and procedures that industries and businesses are bound by law to follow when they are generating, treating, disposing of and transporting their hazardous materials and wastes in order to protect the public’s health and safety.

Formaldehyde: Global production of Formaldehyde is almost 50 billion pounds annually, according to the International Agency for Research on Cancer (IARC).  Formaldehyde is quite commonly used in the chemical industry as a chemical intermediate and in the manufacture of resins. It is a known human carcinogen.  Short-term moderate to high levels of exposure can be fatal.  Low level long-term exposure causes respiratory problems and eczema.

Cadmium:  Iron making by-products are largely composed of limestone, iron ore impurities and slag collected on top of the molten iron. Emissions control equipment captures the hydrogen sulfide and sulfur dioxide emissions that have been volatized. These are highly toxic. Residual waste slag is sold to the construction industry, with the exception of the slag waste produced from the BOF process. It has a much lower metallic count, making it inappropriate for construction.  Electric arc furnaces emit waste as gas or dust. If the waste includes cadmium, it is hazardous. Exposure to Cadmium and its compounds are known to cause cancer because it is highly toxic. It targets the body’s respiratory, gastrointestinal, cardiovascular, neurological, renal, and reproductive systems.

Metal working fluids:  These fluids contain a plethora of hazardous materials.   Ethylene oxide (EtO) is used in the process. (Its effects have been previously described.)

Toluene:  When exposed through breathing or swallowing it, or having it come in contact with their skin or eyes, toluene can make workers sick immediately.  Its sharp, sweet odor is a warning of exposure. High concentrations of toluene from use in an unventilated area or a confined space can cause respiratory depression, loss of consciousness and death.  Safety precautions and proper ventilation are necessary to prevent irritation to throat, eyes and nose, dizziness, confusion, and headaches, and cracked skin.  Breathing high levels of it when pregnant may result in children with birth defects and affected cognitive abilities. It is sometimes associated with spontaneous abortion. When swallowed, it can cause kidney and liver damage.

Methylene chloride: This hazardous material is used in cleaning and degreasing metal.  Methylene chloride is considered by OSHA to be a potential workplace carcinogen, increasing risk for not only cancer but adverse effects on the cardiovascular, central nervous system, and liver if inhaled.  Chromium, valued for its hardness and corrosion resistance, is used as an alloy in chrome plating [Cr(VI)], chromate production [Cr(VI)], the Ferrochrome industry [Cr(III)and Cr(VI)], stainless steel welding [Cr(VI)] and Chrome pigments.

Chromium VI (hexavalent chromium): This human carcinogen is the principal concern for worker health and safety due to its extreme toxicity.  Workers involved in soldering, welding, brazing, torch-cutting and other “hot” work operations are highly exposed to chrome pigments and need to wear safety equipment.  Statistics in 2011 indicated that national production of chromium was approximately 160,000 metric tons. This amount was derived almost entirely from recycled stainless steel scraps. It is even greater now.

Benzene: The Petroleum industry produces the most non-biodegradable materials (plastics) of any other industry, many containing dangerous chemicals and toxins which are also non-biodegradable.  Benzene is a hazardous material used in petroleum refining and petrochemicals, rubber tire manufacturing, and the transport or storage of benzene itself and products containing benzene. Benzene is also used in the manufacture of plastics. It is present in gasoline and other fossil fuels.  Short-term occupational exposure to high levels of this material can cause dizziness, drowsiness, unconsciousness and death. Long-term exposures may affect blood production and the body’s bone marrow.  Workers have been known to develop and die from leukemia.

1,3-Butdiene:  1,3-Butdiene ranks as the 36th most produced chemical in the nation, with the United States producing three billion pounds of it annually. It is used in petroleum refining, plastics manufacturing, the production of synthetic rubber, and is present in fossil fuels.  The EPA rates this material as a human carcinogen if subjected to long-term exposure. Acute high levels of exposure may damage the central nervous and cardiovascular systems, cause blurred vision, vertigo and headaches, and lead to overall fatigue and fainting.

Hydrogen sulfide: Hydrogen sulfide is produced in oil and gas refining.  It can be released with the extraction of natural gas and occurs naturally in gas and oil wells. Because it is heavier than air, it collects in enclosed and low-lying spaces, making such work spaces extremely dangerous.  It is one of the leading causes of workplace deaths due to gas inhalation in the country. Well-known for its “rotten egg” smell, it is both highly toxic and highly flammable.  Hydrogen sulfide can almost immediately overcome unwitting workers in small spaces and is quickly fatal.

Produced Water Hazards:  The process of hydraulic fracking is used to drill a natural gas well. The water solution blasted into the well bore may come up out of the well with the released natural gas when the fracking is finished.  This “Produced Water” contains hazardous materials such as the toxins toluene, xylene, ethylbenzene and benzene.  It may also contain naturally occurring radioactive materials (NORM) such as radium in higher than average concentrations, especially if it is rich in chlorides and salt. Whereas the EPA allows a maximum of only 5 picocuries of radium for each one liter of potable water, Produced Water has been found to have levels of radium as high as 9,000 picocuries per each liter.

Between the oversight of the Occupational Health and Safety Administration (OSHA) and the Environmental Protection Agency (EPA), industries that produce and use hazardous materials must do so within federally mandated health and safety guidelines.  These are in place to assure the protection of workers’ safety and the health of the natural environment.